Westport Homes and Condos for Sale

Westport, Connecticut, is a small town in Fairfield County. It was founded by the Bankside Farmers, a group of five men who, along with their families, settled its land in 1648. Several years later in 1835, it was incorporated as a city. Today Westport has a population of approximately 28,000 residents.

Westport is a small yet affluent town. As a matter of fact, it’s one of Connecticut’s wealthiest communities. It’s also a town highly dedicated to history and art. The Museum of Westport History was built in 1795 and was once a residential building. Today, the building house Victorian-style rooms and a gift shop. Westport Country Playhouse used to be a 19th-century tannery. It offers five theatrical performances each year from April to November, plus family-friendly events. You can see many interesting artworks at the Westport Arts Center. Additionally, it has concerts, camps, birthday parties, and art classes. Pasacreta Park gives you a scenic view of the Saugatuck River. This quaint park contains a police memorial and a riverwalk. If you want to explore Saugatuck River, you can do it through the Saugatuck Rowing and Fitness Club. Sherwood State Island Park makes for an excellent mini-vacation spot. The 235-acre park possesses beaches suitable for fishing and swimming, a 9/11 memorial, and picnic areas. There are 14 schools in Westport: five public elementary schools, two public middle schools, one public high school, four preschools, and two private schools.

Over eighty-six percent of Westport real estate properties are single-family dwellings, making this city perfect for homeowners. Other kinds of Westport homes include small apartment buildings, townhomes, mobile homes, and apartment complexes. They have an average of four bedrooms, and most of them were constructed during the early/mid 20th century. This town is also ideal for families since kids and teens make up about twenty-eight percent of the population. Think about moving to Westport. It’s charming, historic, and artsy. If you want to know more about homes for sale in Westport, Connecticut, please reach out to us today.

A one of a kind modern home offering a one of a kind lifestyle! Originally built in 1908, taken down and completely re-built in 2011 with a recent contemporary addition, ...

Grand & gracious, this is a unique estate property in the heart of Westport. Offering a luxuriously-appointed main residence, gunite swimming pool & a fully-equipped cott...

This fabulous to be constructed home by Greyhome Partners offers a spacious contemporary colonial on .43 acres on a coveted walk to town cul-du-sac, with room for a pool....

Light-filled, custom built 5 bedroom colonial set atop a hill on one of Westport’s most coveted streets in Old Hill. This immaculately cared-for home is in mint conditi...

Venice Beach, CA meets Westport, CT! This classic Colonial was renovated thoughtfully to maintain the 1930's charm but function for today's needs. On the corner of a cul ...

Enjoy all that Westport has to offer in this picture perfect colonial farmhouse. Located on a quiet cul-de-sac in the heart of Westport, close to Compo Beach, The Longsh...

The best just got better in Coleytown, 40 Easton Road is the dream home you have been waiting to hit the market. This gorgeous 4 Bedroom, 3 Full Bath, sun drenched home w...

Location, location, location!!! Welcome home to 23 Fairfield Avenue! This DREAM location is steps to Compo Beach where you can enjoy coastal living all year long. Upon en...

A rare Michael Greenberg renovation on a quaint cul-de-sac - walking distance from Compo beach, Saugatuck restaurants, and the Westport train station. This original 1938 ...

Bermuda Point gracefully sits on the southern shore of Westport, CT boasting over 170 feet of direct Long Island Sound frontage. Enjoy both the sunrise and the sunset on ...

Built in 2008, this Greens Farm classic colonial is ideally sited on .75 flat and dry acres that are framed by stone walls. Incredibly convenient to Westport's vibrant t... 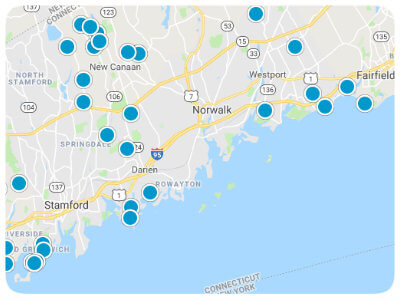